Caracal Tours & Safaris, Tanzania is managed by Bernard (Ben) and Marion Sumari-de Boer. Ben was born in Arusha (Tanzania) and has extensive experience as a safari guide. Marion is from the Netherlands and often traveled to Tanzania to do research and volunteer work. Together they form the perfect team in which Ben  is mainly responsible for conducting safaris and Marion for bookings. They also employ staff such as guides, porters and administrative staff.

Ben: “I was born in 1984 in Arusha and grew up on the lower slopes of Mount Meru, in Arusha NP. My tribe is Meru. It is the largest tribe in Arusha. Because I love nature, I decided to go to  the Wildlife College in Arusha where I obtained degrees in knowledge of wildlife, mammals, birds, botany and geography of Tanzania and its national parks. I also have a driver’s license to transport tourists. I have experience as a safari guide in Tanzania’s spectacular Northern Parks since 2005. I’ve worked for several companies where I gained a lot of experience in tourism. It was here that I got the idea to start my own business. I do most safaris myself, simply because I like it a lot. My goal is not only to guide the tourists in tours and safaris, but also to help keep the environment clean, which is important because then we can conserve and preserve the nature that my country and Africa are proud of. If we keep the environment clean, we will also be able to continue to offer trips and safaris in the future.

Marion: “I was born in the Netherlands in 1981. Since 2006 I have made several trips to Tanzania to do voluntary work and research. Because I fell in love with this country and its people, I decided to go to Tanzania for good in 2010. During that time I have been in safari a lot. The beautiful landscapes and the variety of animals in the national parks of Tanzania amaze me every time. I love driving through the endless plains of the Serengeti NP and seeing the animals up close. I think everyone should see the amazing nature of Tanzania. Besides my work as a researcher in the local hospital, I love to organize trips for tourists so that they have an unforgettable experience in Tanzania. I also think the environment and fair management is important so that tourists can continue to visit the national parks in the future.”

Martha: “I’m a Tanzanian female journalist who was born in the Northern part of Tanzania. I have more than ten years experience writing on environmental issues, human rights as well as other cross-cutting issues. Apart from my journalism career, I’m also interested in wildlife issues which are also part and parcel of environmental issues. I obtained my diploma in journalism from Arusha School of Journalism and later on I pursued my degree in law from Moshi Cooperative University. In Caracal Safaris, I’m th logistics manager and responsible for bookings, payments, and other activities related to tourist travel. I also make arrangements on the cars to be used on travel, drivers, lodges/hotels, local flights, balloon safaris, among other things. Moreover, I’m also responsible in case of emergencies such as car breakdowns, injuries during the travel, changes of time table, etc. Welcome to Tanzania, the Home of Kilimanjaro and Serengeti. Welcome Caracal Tours & Safaris Tanzania for Memorable Safaris!”

The caracal is one of the unique little cats on the savanna. It eats birds, but also small mammals. This cat has long hind legs that help it leap in the air to catch birds as they take off from the ground and large mobile ears so it can hear prey in the grass. Finding the caracal in the savanna is very difficult, however, we will do our best to try to show you a caracal. 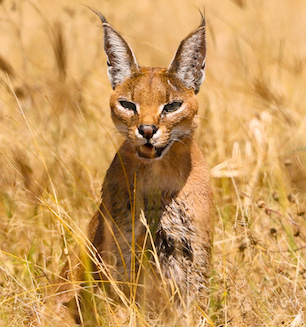