Enduimet is a wildlife management area between Mount Kilimanjaro and Mount Meru. It extends as far as the Kenyan border at Amboseli National Park, thereby forming a natural corridor for migrating elephants between Arusha National Park and Amboseli National Park in Kenya. Enduimet is pure, of course not much has been affected by tourism yet. You will also find animals here that you don’t see much in other parks such as the greater and lesser kudu, gerenuk and even oryx. Other animals include cheetahs and grazers such as wildebeest, zebras, giraffes, gazelles and impalas. With Kilimanjaro and Meru in the background, the area is a unique place for fantastic views and wonderful photography opportunities. As this is a wildlife management area, you will also find the Maasai there. During the game drives you will often see huge herds of cattle followed by a Maasai boy or man. Since there are no lions or leopards, both are also very suitable for bicycle safaris. You can spend the night at simple campsites or in the beautiful lodges in the area, most of which have a Maasai theme.

Many people know Ngorongoro Crater with its great concentration of wildlife, but don’t know the other beauties of the Ngorongoro Conservation Area. The area consists of several mountains, craters and calderas. Olmoti Crater serves as the main watershed in the area. It acts like a sponge and the water pours over a weak spot in the crater where it forms a beautiful waterfall about 100 meters high. Another spectacular crater is Embakaai Crater. It is possibly the most beautiful place in the whole area. The combination of a fog-shrouded area and an emerald blue colored lake gives you a fairytale atmosphere. Other interesting places are the Lolmalasin Crater, Oldoinyo Lengai, the Gol Mountains, Ilkarian Gorge, Nasera Rock and Lake Ndutu. All can be visited on foot or by car.
More information can be found on the website of the Ngorongoro Conservation Authority. 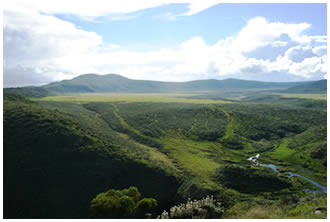 Dazzling Lake Ndutu is located on the border of the Ngorongoro Conservation Area and Serengeti NP. It is best to visit in February when the wildebeest migration is in this area. Hundreds of stampeding wildebeest stomping through the shallows of the lake is a sight not to be missed. During that time there is a great chance of finding the big cats like lions and cheetahs. In Lake Ndutu you can see the animals up close, of course without disturbing them. There are several mobile camps where you can stay overnight. 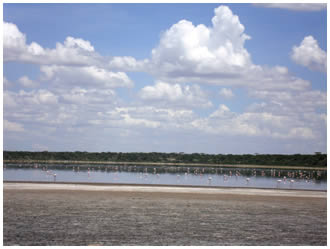 Lake Natron is a shallow salt lake that is very attractive to flamingos. When they are there, the lake turns completely pink. It is near Oldoinyo Lengai and together they make a nice pair in the landscape. That is why they are often visited together in a trip. 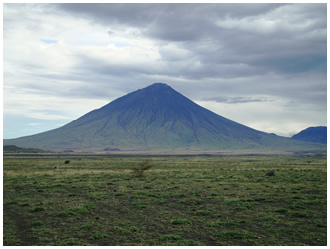